I remember the urge to run. The long line that snaked along the side of the Colorado Convention Center in Denver dragged me in the building, up a wide flight of stairs and released me into the cavernous Great American Beer Festival—my first. I’m not sure what I was running to. I almost expected a lifeguard to yell, “No running!”

So I did the same straight-legged, hand flat down my sides speed walk that over-stimulated children do around a pool. I hustled to the first brewery I saw. Little did I know that the first beer sampled at the country’s largest and most renowned beer festival was my symbolic cannonball into a fascination, a career and a whole new life that I have loved ever since.

That was over a decade ago.

Today, my GABF starts well before the line begins. I’m on the other side of the stanchions — the other side of the booth. I still get just as excited. And proud. I see the same elation on other first-timers’ faces that I’m sure was stuck to mine. I think about how much the festival has grown, how much the small and independent brewery scene has grown and maybe I’ve grown, too. (Nope, still 5’10”.) I remember when dropping one’s tasting cup was license to go bat-sh*t crazy; it still is. Not necessarily from hearing that roar 20 times each session, but from seeing the joy that it brings.

As we look to this GABF, I figured I’d share some ideas for newcomers that I think will help make your GABF as life-changing as my first time. Everyone experiences GABF differently, but if I had a chance to do it all over again, I might consider these.

DO: Make a plan

The MyGABF app didn’t exist for my first fest; I’m pretty sure no apps did, but it would have been helpful. In subsequent years, I’ve been able to create lists of breweries or beers that I wanted to visit. Use the app to create your own wish list, track beers you’ve sampled or check out the lists of beers and other things going on at the GABF.

DO: Eat before and drink water during

Savor the Flavor responsibly and don’t let the fest get the best of you. Having some food in your stomach is imperative and water is an important part of life in the Mile High City regardless if you’re enjoying beer or not. Free water stations are located throughout the hall—you may want to fill your tasting glass with water after every two or three samples to stay hydrated.  Often the Brewers Studio hosts free food pairings so check out the schedule for your session! 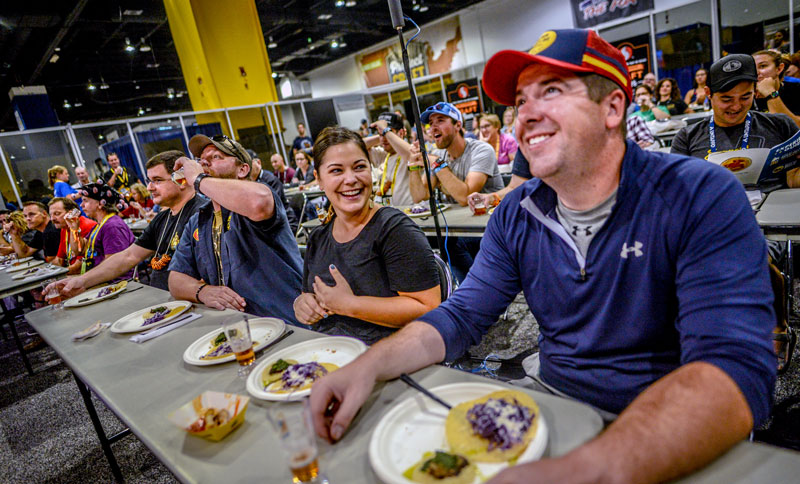 Nobody will ever know everything there is to know about beer — that’s part of the reason we love it — but sharing perspectives and knowledge can go a long way in understanding it better. Whether you like the beer you’re sampling or dislike it, ask about it. What’s the style history? What was the brewer’s intention? Ask the them directly in Meet the Brewer. After you learn about the beer or brewing process, maybe your initial impression will change. 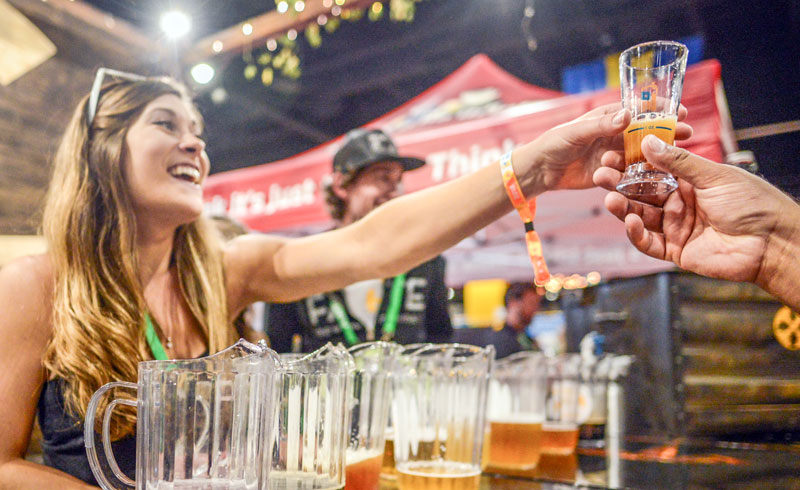 This might be just my preference, but I can’t stand waiting in line. No matter what beer is being served at the front of the line, it’s not worth it. If a glass of beer is normally about eight to 10 minutes of enjoyment, then spending 15 minutes in line for a one ounce sample just doesn’t compute. Instead, set your sight on finding the beers that will be commanding long lines at next year’s GABF. There are plenty of them. Find them.

DO: Make a pretzel necklace

No accessory says “I’m here to have fun” like a pretzel necklace. Get creative, make it a statement piece. What? You’re too cool for pretzel necklaces? How are you going to cleanse that oh-so-refined palate? Matzo medallion? 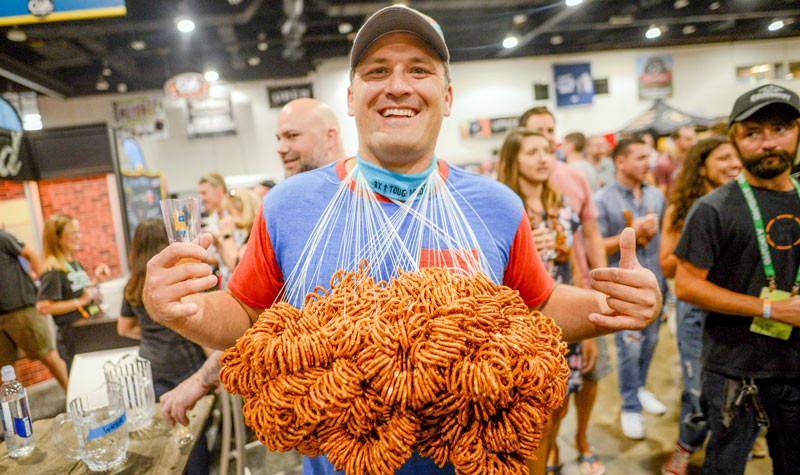 I know what you’re thinking: This dude wants me to waste beer!? That’s right. Nobody is going to shame you for dumping a beer you don’t like. There are hundreds of others to choose from. You aren’t going to hurt anyone’s feelings. Dump that sucka and find one you’d like to sip on for a bit. Downing a 12% barleywine that you don’t like will only wreck your palate, fill your tummy (and bladder) and bring you closer to naptime.

DO: Mix it up / DON’T: Beer Fest like it’s just another beer fest

The Great American Beer Festival isn’t just any other beer fest! Want to sample only award-winning beers? Check out the Heavy Medal booth. Need to get off your feet or expand your mind? Stop by Camp CraftBeer.com for a Sit & Sip featuring the stories of amazing craft brewers. There are so many ways GABF is not just another beer festival.

Do yourself a favor and stop by the Silent Disco, grab a pair of wireless headphones and get down. It’s a unique experience, dancing with strangers, to music only you can hear. And if it’s always been your dream to belt it out to thousands of beer lovers, warm up your pipes and sign up for karaoke in The Backyard. Sure, the person before you also sang Journey, but hold on to that feeling… the crowd doesn’t mind and they will absolutely join you for the chorus! 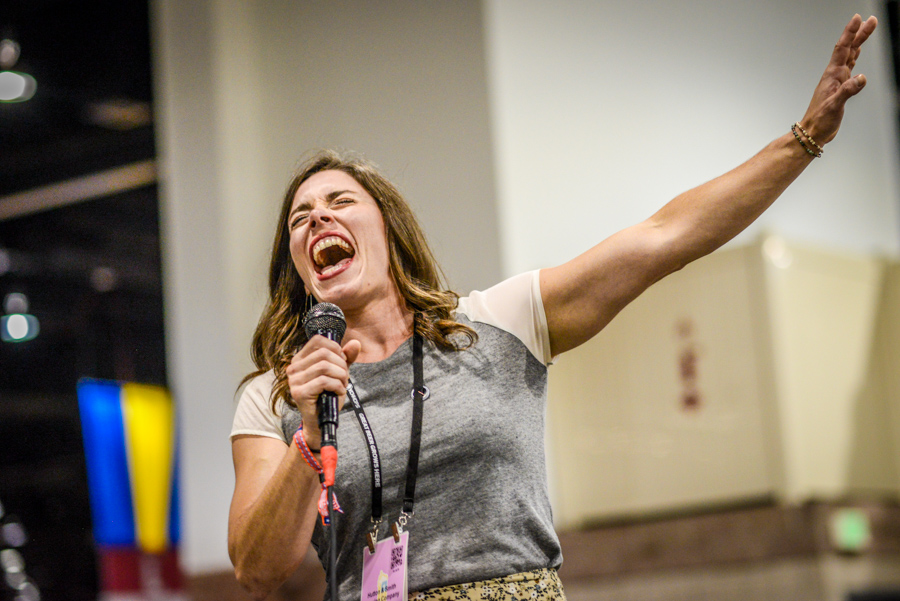 DO: Get home safely

Do yourself (and others) a favor: get to and from the convention center responsibly. Call a cab, use a rideshare app, hop on the light rail, or make sure your DD knows how awesome they are for taking the wheel. Remember to Savor the Flavor, responsibly.

There are tickets for the Thursday, October 3 and Saturday, October 5 evening sessions. Join us in October for the greatest beer festival of all time, the Great American Beer Festival. Don’t miss out on the world greatest celebration of small and independent craft beer. Buy your tickets, today.

After 38 years the Great American Beer Festival has become much more than just a beer festival: it’s a family reunion for many attendees and brewers alike and a source of great pride for all who have the chance to work on it. If you’ve been before, you’ve likely figured out your own tips on enjoying your time. I hope that if you’re joining us for the first time you take some of my advice. With all that the festival and its breweries have to offer, we want you to have it wash over you like it has done for us. It is not an exaggeration to say that the GABF changed my life, and I have looked forward to it every fall since.

Bonus tip: Don’t run. Or at least don’t run like I did. 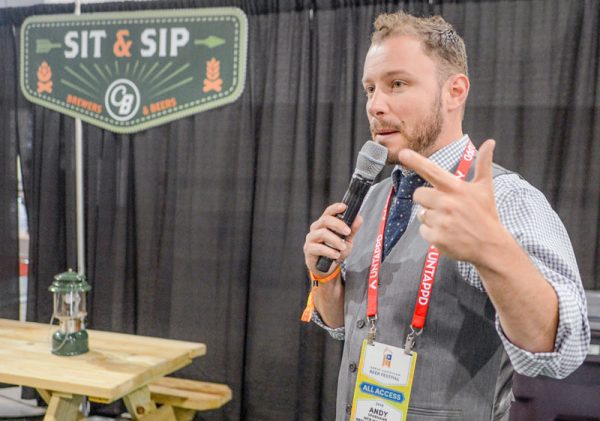 Andy is a BJCP Beer Judge and Certified Cicerone®. He lives in Arvada, Colorado, where he is a homebrewer and avid craft beer enthusiast. On occasion, Andy is inspired to write on his experiences with craft beer, and if they are not too ridiculous, you might see the results on CraftBeer.com